Army dad Paul and his baby, just after birth (Photo courtesy of the Schmidt family)

Editor’s note: This is a continuation of our ‘Rad Dad stories’ series, which we started in our inaugural magazine. This series features interviews from real dads and moms about their experiences. To be featured in a future blog post or magazine, please contact us at info@raddadbox.com

If you do a Google search on how dads can be involved during pregnancy, childbirth, or during the newborn days, you’ll find a plethora of articles (ours included!) with answers to these questions. Talk to the baby while he/she is still in the womb. Massage your partner’s arms and hips while she’s in labor. Make sure you have skin-to-skin time with baby, too.

But what if you, Dad, can’t be there for these moments? Many military dads, for example, are deployed during the entire pregnancy and even during childbirth and the first few months of the baby’s life. Some may be present for part of the pregnancy and during childbirth, but may have to deploy soon after the baby is born. How can dads bond with their babies in situations like these?

To help answer some of these questions, we spoke with a customer of ours, Kelsey Schmidt, whose husband, Paul, serves in the United States Army. Kelsey and her husband welcomed their son into the world last April 2017.

The Rad Dad Box: Was your husband deployed during your pregnancy? Childbirth? Or soon after?

Kelsey Schmidt: My husband deployed when I was two months pregnant. He was originally supposed to be deployed for nine months, meaning that he would only come back when our baby was three months old, but due to unforeseen circumstances, and what I believed to be the universe being on our side, Paul was able to come home 4 months early….TWO weeks before our baby was due! He was there for the birth, but then was called away to duty again almost a month later for another 6 weeks.

The Rad Dad Box: With your husband’s deployment, what did you as a family do to help foster his bond with the baby?

Kelsey: Before he left for deployment, we got a recording story book and had Dad read it so baby would know his voice. With hormones raging at the time, of course, I sobbed in the kitchen while hearing him record our baby’s storybook knowing how he was secretly afraid thinking our baby wouldn’t know who he was when he returned.

With military OB/GYN clinics, at least in our experience, you are just offered one ultrasound (anatomy scan). So we found a place that did private ultrasounds that allowed us to hear the heartbeat for the first time and see the baby at 8 weeks. We received a little heart that you could press and played a recording of the baby’s heartbeat, which my husband took with him overseas. They also had a gender package where you could find out at 15 weeks, which was a week before he was due to leave. We found out we were having a boy! So we went shopping and Dad picked out two coming home outfits–something we would put in the baby’s special box and keep forever. Just days before he left, we purchased a home doppler so he was able to hear and feel our boy’s first kick.

The Rad Dad Box: You and Paul spent the majority of the pregnancy apart. Were you able to communicate regularly, via phone or Skype? I also imagine that it must be difficult to be separated during such a time. Did you have any family or friends around for support?

Kelsey: Paul left on Halloween and I had 7 months left of being pregnant, with family hours away. Luckily I had started school earlier in the year so I had the support of some of the girls in my class. If it weren’t for a couple of them, I don’t know how I could’ve survived! If someone offers help- TAKE IT! Although I’m a very independent person (and still felt guilty), I accepted any help I could get. Baby comes first which means your body comes first.

Unfortunately, because of the location where Paul was deployed he didn’t have great signal which meant video/voice chat was a no-go. With limited communication it was hard not knowing what he was feeling- was he excited? Scared? Happy? (Of course I knew he was all of these things, it’s just nice to see it). And of course the hormones started raging once again, making myself think maybe he wasn’t? Or afraid he didn’t know what was about to hit him when he returned. As crappy as it is, there’s not much you can do about these thoughts but tell yourself it’s just hormones! Though I knew I most likely wouldn’t get replies most of the time, I messaged him daily updating him on everything knowing he would receive them eventually.

The Rad Dad Box: You mentioned that Paul was able to come home two weeks before you were due. How was it like to see each other after so long and so many changes?

Kelsey: He was shocked, but he was also excited how big my belly had gotten! He talked to our baby every night before he came into the world on April 4, 2017.

The Rad Dad Box: Can you share your birth story and how Paul was involved?

Kelsey: I was scheduled for a cesarean and the look on his face after putting on scrubs is something I will never forget- you could tell every thought in the world was running through his head.

The baby was born, and you can see dad mode automatically turned on. I will say the hospitals are GREAT when it comes to involving dads during the birthing process. He cut the cord and helped weigh/measure our son. About an hour after delivery, our boy Max was taken to the NICU due to fluid in his lungs (common after a c-section). I told Paul not to leave our baby, as I was unable to leave the bed. Paul gave Max his first bath and for the second time I saw a photo of our baby’s face without all of the headgear he had to wear in the NICU. The next week consisted of trips back and forth to the NICU, Paul delivering the breast milk in the middle of the night I spent time pumping and him sleeping on the uncomfortable chair bed when I was forced to go to bed and rest.

After coming home and enjoying every second with our happy healthy boy, less than a month later, duty called and Paul was away for another 6 weeks. 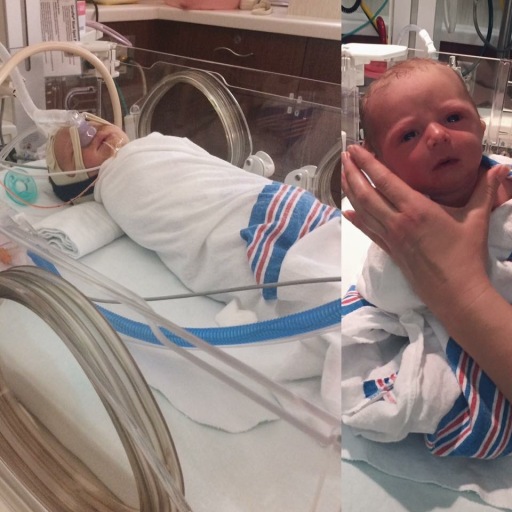 The Rad Dad Box: Do you have any advice for military families who are going through the same or a similar situation?

Know that the hard times of being apart will pass and the love will always be there. Just like Mom, Dad mode doesn’t turn off! If you have older children, SEND CARE PACKAGES! A simple card or letter means more than you know. And lastly the thing i think is probably most important and simple, bring dad up in conversations every day. Military life is unpredictable, take advantage of EVERY SECOND you have together!

This post is for all the Dads-to-be! So, you’ve bought the car seat, the stroller, the crib, and you’ve stocked up on diapers, wipes, baby clothes, and almost every baby necessity you can think of. You’ve taken and attended childbirth and baby care classes with your partner. The hospital bags have been packed and are sitting by the door. The big day is almost here.

Now, you’re afraid that you’ve forgotten everything you learned about childbirth in your classes. What positions are best? What about breathing exercises? Your partner doesn’t remember either, and you both start panicking. But never fear – that’s why we’re here! We’ve been there! To help, we also spoke with 20 couples (and drew on our own personal experience) about how dads can be involved during childbirth and have put together this guide for you. Read on for more!

We also wanted to add some words of advice for couples who undergo C-sections (whether it’s scheduled or an emergency procedure). Dads can still be involved in both situations. With a C-section birth, it’s important to be there and hold your partner’s hand (if she asks). If it’s an emergency C-section, it’s possible that this may not be the ideal birth experience your partner wanted. Try to reassure her and tell her that the most important thing is that the baby will be safe and healthy. Also, since C-sections require total anesthesia from the waist down, your partner may not be able to walk for a few hours afterwards, so you will likely be the first one who changes the baby’s diaper and cares for the baby while your partner recovers and regains sensation in her legs.

Do you have any advice for expecting dads, and how they can be involved during childbirth? Let us know in the comments!

We all know that dads are much more involved nowadays than in generations past. These days, dads actually attend childbirth classes with their wives and are present during the baby’s birth. (Although, to be fair, that has been the trend since the 1970s.) Although expecting dads are stepping up to the plate more, some may still find it hard to bond with their babies-to-be, and may need a little nudging on how to be more involved during pregnancy. So, aside from attending childbirth classes, what are some other ways expecting dads can be involved?

Need more ideas? Parents Magazine also has a great list of suggestions on how expecting dads can bond with baby!

Dads, how did you bond with baby in the womb? Let us know in the comments!

After coming home from the hospital, some dads may feel left out of family life and struggle to bond with their babies. In fact, a 2009 study found that 40 percent of dads felt that they had nothing to do after the baby was born. However, there are plenty of things new dads can do to foster their bond with Baby, help new moms to recover from labor, and be involved. Changing diapers is a given, of course, but we’ve outlined a few other ways new dads can be involved in their family’s life.

So, Dads, we hope that this list will give you an idea of how you can be involved, how you can help your partner recover, and how you can bond with baby after you and your partner bring your little one home from the hospital! Experienced moms and dads, do you have any other suggestions? Leave them in the comments!

(Disclaimer: This post is written by Michelle, the mom behind The Rad Dad Box)

However, when our son was born and had trouble latching, and I was having issues with my milk coming in, we realized how important it was for Dad to be involved, too.

Now, if you’re one of those moms whose baby latched immediately and started nursing like a champ, and who never had an issue with supply, then consider yourself lucky: You can ignore this post! However, if you’re still pregnant or if, like the majority of women, you have struggled or are currently struggling with breastfeeding, please keep reading to see how your partner can help.

Did we miss anything? Have any other tips on how dads can help with breastfeeding? Let us know in the comments!